The Northeastern Deciduous forests are an ideal environment for many mammals, birds, amphibians, reptiles, and invertebrates. But what about the trees where many of these creatures make their home? There is a vast variety of trees that grow in the Northeastern Deciduous forests. The following are some fascinating examples of trees that show an awe-inspiring aspect of America’s ecosystem. This tree can grow 115 to 200 feet tall and grows fast when it is young. The Norway Spruce can grow up to one meter per year for the first 25 years under good conditions. While this tree can tolerate acidic soils, it does not do well in dry earth. In fact, from the late 1920s to 1960s, the Norway Spruce was planted on mine spoils in order to create an ideal growing environment. This spruce is an evergreen coniferous, meaning that it will not lose its entire needle-like leaves within a season. Even though people believe that an evergreen never loses its leaves, in reality it is shedding in a gradual manner throughout the year. Although this is a tree native to Europe, it is widely planted in the American Northeastern and Pacific regions as a popular ornamental tree. 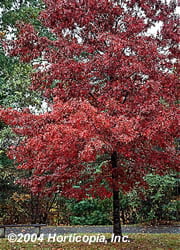 An oak tree is known for its beautiful leaves, their unique shape, and its production of acorns. Sometimes the Northern Red Oak is simply called the “Red Oak,” by default, but one should differentiate from the Southern Red Oak. This tree can grow between 90 to 140 feet tall, and is known for living an exceptionally long time – up to five hundred years. The Red Oak’s most defining feature is its noticeable bark ridges with shiny stripes, and its dark red to dark brown hue. The leaves turn to lovely colors in the fall. 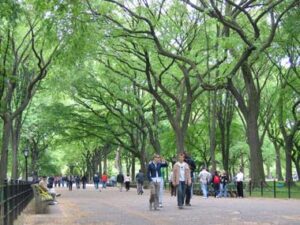 A native to the American Northeast, the American Elm is the largest and most common elm tree. It can reach 100 feet in height. However, the American Elm is also susceptible to Dutch Elm disease, which is carried by adult Elm Leaf Beetle. This tree is also hermaphroditic, meaning that it can self-pollinate to produce small, purple brown flowers that bloom in early spring before the leaves emerge. 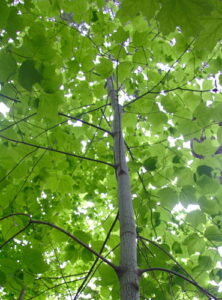 Unlike the previous trees described, the Striped Maple is a shorter tree that only grows 16 to 30 feet and is a nice decorative choice for your lawn. The Striped Maple tends to grow in mountainous and higher elevated regions. This tree grows well even with shade, and will grow much like a shrub until it has space to sprout to its full height. A young Striped Maple will have striped green and white bark, which will become brown as it matures.

Visiting a wildlife park or nature preserve is a great way to experience America’s Northeastern Deciduous forests. The Appalachian National Scenic Trail is an enormous trail that spans 14 states on the eastern border. The trail stretches from Maine’s Mount Katahdin to Georgia’s Springer Mountain, which displays an even greater diversity in deciduous forest trees. These magnificent trees are a testament to the resiliency of plant life, in an age-old cycle that will hopefully last as long as the earth.