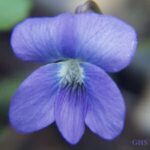 You may love New Jersey, but do you know the state tree and state flower off the top of your head? Interestingly enough each one of the 50 states in the USA has their own official tree and flower; among other official things like the state bird. For the most part, each flower and tree is native to that particular state or area of the country, but there are some flowers that have been chosen for their symbolic importance.

The state flower of New Jersey is the viola sororia, or more commonly known as the blue violet. In 1971, the garden clubs from across the state pushed for this flower to be marked as part of New Jersey’s culture. This flower is native to this area of the country and its most unique characteristic is that these violets produce many buds after they have already bloomed. Violets also are a popular ingredient among bakers and cooks. Some jellies, candies, and salads include violet petals and interestingly, they are filled with vitamin C! In many places the gift of violets is considered a symbol of a good future/prosperity.

For future reference, be very careful not to destroy or move state flowers and trees if they are not on your own property. Be aware of this in any state, because it is considered a “crime.” Many states have in depth laws about issues like this, and in many places there are large fines associated with removal or destruction of certain trees and plants.

The state tree in New Jersey is considered the red oak, or its scientific name: quercus borealis maxima. This was chosen and added to the New Jersey legislature in 1950 after Governor Alfred Driscoll authorized a joint resolution for this event. Mostly, this hardwood tree is recognized by its pointy leaves and the vibrant red of these leaves in the fall. It is also believed that the Native Americans relied heavily on acorns from these trees as part of their diet. What is also interesting about the red oak is that on the first designed Medal of Honor for the US Armed Forces there was what is thought to be a red oak leaf depicted. The red oak is a very significant timber tree, and one of the largest.

As you can see, there truly is a lot more meaning behind state trees and flowers than you may think. These state designations are part of what makes our country so unique. There are various other symbols for most of the states such as a state flag or state animal, but many also add other things like dances or whatever they feel is a good representation of the state’s population. Now did New Jersey coin the phrase, “the acorn doesn’t fall far from the tree”? We couldn’t find any documentation to support that, but it’s possible!